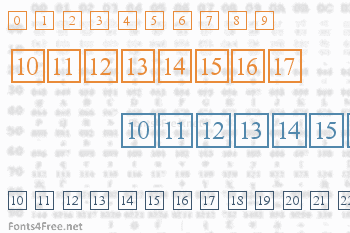 What it says: those ancient numbers in square boxes, once used for tracks on audio CDs. Up to number 35, also a (P) in a circle and the [A] and [D] in square boxes for analog/digital recording.

This symbol font was made for your CDs, especially, if you like to use those old track number symbols. It contains the track numbers in square boxes, a(P) in a circle and the A and D in square boxes for analog/digital recording etc.

There are two different character forms for the numbers: Serif forms on 1..9 and then A..Z Sansserif forms on f..z

A and D in a box are on a and d, for obvious reasons. The char length is such that they blend together when you type aad or ddd or similar. 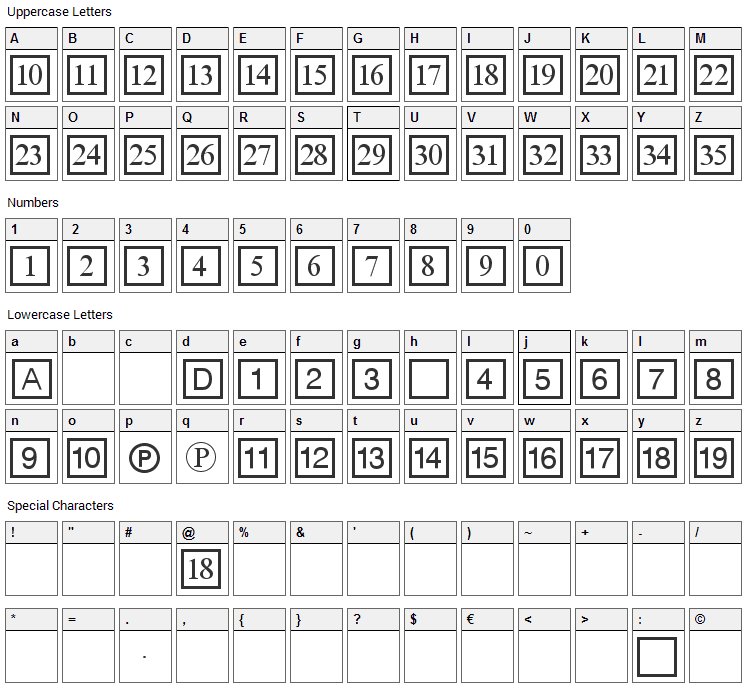 Track numbers in square boxes - made in the 1990s when those were the usual symbols for tracks in CD booklets. There are serif figures on the characters 1...9, continued on the uppercase characters to Nr. 35 (on "Z"), as well as sans-serif figures on the lowercase characters. Also an [A] and a [D] in square boxes on "a" and "d", as well as a (P) in a circle on "p" and "q". This font is in the public domain or, if that is not possible in your country, free to use for any purpose free of charge.

Submit a comment, question or review about CD Numbers font

CD Numbers is a dingbats, various font designed by FontGrube AH. The font is licensed as Public Domain / GPL / OFL. Public domain fonts are free of known copyright restrictions because intellectual property rights have been forfeited by the respective author or property rights have expired. The font is free for both personel and commercial usage. For your questions, please contact the designer directly from fontgrube.de.

CD Numbers font has been rated 4.0 out of 5 points. A total of 1 votes cast and 0 users reviewed the font. 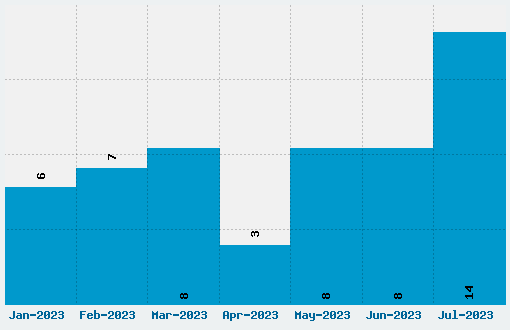