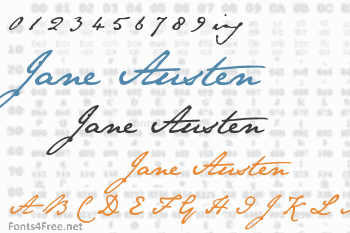 Made up out of characters penned by Jane Austen, this font can't of course quite equal her handwriting. Its aim was to create something like an average image. Naturally, this has endowed it with the principal flaw of all typefaces: it's looking far too regular.

There are some peculiarities to this font.

-- On the number sign, you will find a complete *the*. Unfortunately, it's ill adapting to any use in the middle of a word.

-- On the Dollar sign, you'll find an alternate Z.

-- The section sign has been replaced with an alternate C, sitting on the line (as opposed to the regular one, reaching far below).

-- The + sign will show up as an *ing*. It's meant to be used at the end of a word, and will look a bit odd when employed in words like "finger".

-- The = sign contains a *ds*, likewise taken from a verb-ending; nevertheless, this one won't look too bad when placed in the middle of a word.

-- On the degree sign, you'll find a *gr*, which should adapt well to all contexts.

-- The right bracket contains an alternate d -- to be used at the end of a word.

-- On the left curly bracket, you'll find an alternate R, sitting on the line (as opposed to the regular one, reaching far below).

-- On the right curly bracket, there is an alternate U, which is fit, moreover, in shape as well as metrics, to be used as a double l.

-- The bar and broken bar sign have turned into an alternate A.

-- The Yen sign has been transformed into an alternate H.

-- The = sign will be found on the double dagger.

-- And the degree sign has flown off to the lozenge.

There is only one currency included in this font, e.g. the Sterling sign; and if you really want to write like Jane Austen, you'll have to employ the German ligature ß -- since she is very consequently and constantly using it for a do 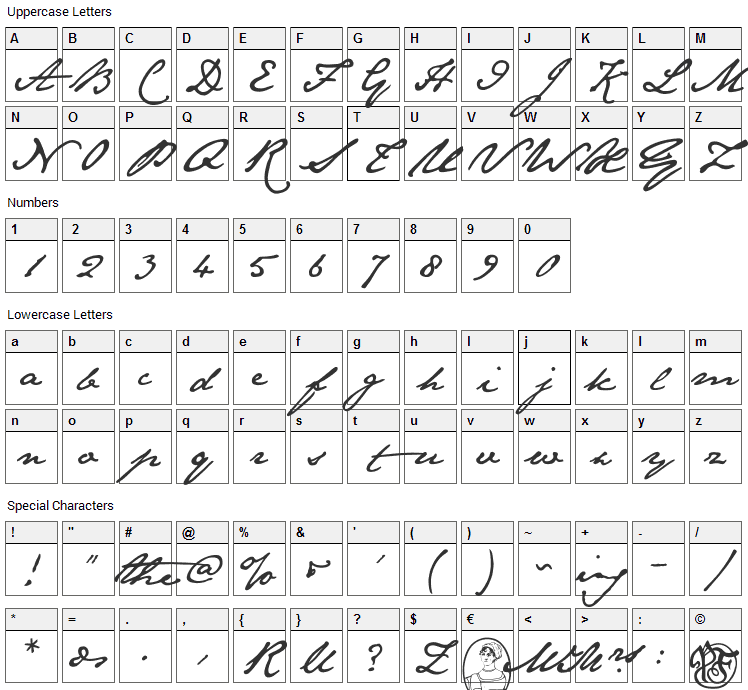 Submit a comment, question or review about Jane Austen font

Jane Austen is a script, calligraphy font designed by Pia Frauss. The font is licensed as Free for personal use. You can download and use the font free for personal projects. For commercial projects please refer to the license file in the package or contact the designer directly from pia-frauss.de.

Jane Austen font has been rated 5.0 out of 5 points. A total of 1 votes cast and 0 users reviewed the font. 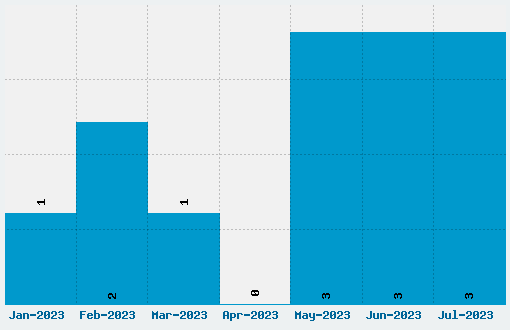