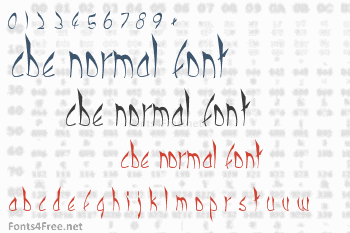 Cool Blue Events - this was a small party organizer troupe in Hamburg for which I had designed a logo. They asked me what font I used for the logo, because they wanted to use the font on their flyers. So, I probably had to make the logo a whole font...

Cbe Normal is a fancy, various font designed by Peter Wiegel. The font is licensed as Free. The font is free for both personel and commercial usages. In doubt please refer to the readme file in the font package or contact the designer directly from peter-wiegel.de.